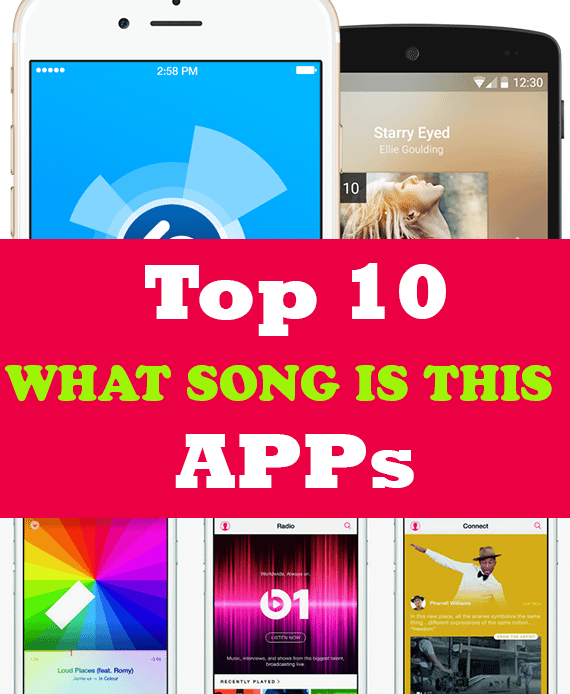 When on the move, you may hear a song that catches your attention. It could be the case when you hear the song on the bus, or at the party, you just had been to or somewhere randomly. This does happen with almost all of us. You might have gone through that strange feeling that keeps annoying you – “What Song Is This?“. Thus, if you are in one such situation, here are the Top Apps that would help you identify the songs easily.

Well, there are several apps that let you identify songs quite easily. We will list out some prominent apps you can use for the purpose.

Shazam is the king of music recognition apps. It does work quite quickly and accurately. The app is available for multiple platforms viz Android, iOS and Windows OS.
The interface is much simple to understand and follow. You just need to tap on the big blue button while the song is playing. The app will listen to the song and present you with the complete details within a few minutes. It will even remember the songs you have tagged, provided you have created an account with Shazam.

The app has several excellent features that would make it a perfect choice. It can even recognize the lyrics so that you can sing along. No issues even if you have no internet… The app will just tag the song when it listens to it. You can search for it later when you are connected to the internet. You also have a web version of the service if you want.
Download Shazam For Android and IOS  Free

This is the best app to detect the lyrics if you have forgotten them. SoundHound helps you detect it with a few simple steps.

SoundHound has some special abilities when compared to Shazam. Not that we are degrading Shazam in any way here. However, SoundHound excels in the fact that it can identify the hums too. That makes it the best choice when you have forgotten the lyrics. You can either sing, hum or even whistle the tune. SoundHound will pick it up and present you with the lyrics.
SoundHound is pretty great as a music recognition service. It does work faster in recognising the music that you hum into it. The app is available on iOS, Android and Windows.
Download SoundHound For Android and IOS  Free

If you want to quickly identify songs, MusixMatch is the prime option for you. In addition to being an app for recognizing the music, it can also be used as a standalone music player.
It works quite simply superb. Moreover, the interface is quite intuitive. Just tap on the Hamburger menu and then tap on identify lyrics. The app will listen to the song and comes up with the lyrics. The app is available for Android, iOS and Windows. The music recognition on the MusixMatch app is handled by ACRCloud.

Though not much popular, MusicID is yet another app that would help you recognize the music around you. However, you may need to make some initial settings to be able to start using the app, though.

Music ID can recognize all the songs being played around you. It can even save the search results so that you can have access to it later. The songs that the app has recognized are listed in the Profile section of the app. Thus, you can access it from the app home page itself. Tapping on the search results would help you find other similar songs (if recognized by the app before). Moreover, there is also a Buy option with a link to Amazon Store.
The Music ID app has mobile apps for Android and iOS. You can find more details on the app at

Coming from Sony, track ID is an efficient music recognition application. The app is available only on Android though.
The is developed by Sony and is powered by Grace Note. The functionality of the tool is quite trustworthy and up to the mark. It does recognize the songs being played around you quicker enough. The song recognition is quite accurate most of the time. It identifies the track and saves it under the History section of the app. The section is available on the home page of the app and you can access it easily.
Apart from music recognition, the Track ID app also offers you a couple of additional functionalities. One of the features is named Discover which helps you find new songs and music tracks. The app has a wide collection of new songs which are updated on a regular basis. The section covers both Trending and New songs. Another feature worth mentioning would be Live. This is a collection of songs that people have been detecting worldwide with the help of the app. You can just check out the tracks and decide whether you would want to play them on YouTube, or share them.
Visit TrackID if you want to check it out.

The recent times have seen a good deal of virtual personal assistants. Each of the major platforms like Android, iOS and Windows have their own virtual assistant. All of these would help you in recognizing the music that could be playing around you.

Google Assistant is the most capable virtual assistant from Google. Initially developed for Android operating system, the service is currently available on iOS as well.
Google Assistant, or its earlier avatar of Google Now can easily double up as a music recognition app. Simply launch either Google Now, or Google Assistant (as the case may be). Type in, or speak to the assistant saying What is this song, or Name this song. The app will listen to the song and come up with the results.
The functionality would be dependent on your region. However, the feature may not be available across all regions, however, it would be made available in a phased manner.

Apple has been upgrading its Siri ecosystem gradually. After a series of improvements, the personal assistant from Apple can be used for recognizing music.
Launch Apple Siri, and type in ( or speak to it) with queries like Name this song, What is this song or What’s that song. Siri will listen to the song and bring up the result for you. The app also offers you multiple functionalities. You can tap on the search results to find the song on the Apple Music, and play it. You can even purchase the track if you wish.

Cortana is the virtual personal assistant from Microsoft. Basically optimized to work with Windows 10, the app finds practical use with Windows phones as well.
The Windows personal assistant is not exactly an able service when it comes to identifying the songs being played around you. However, it does work efficiently. Just launch Cortana and ask What is this song, or What song is playing. It will identify the song for you and present the results for you. The feature is also available on all Windows based PCs.
However, please note that the Cortana app is available for Android and iOS, but does not offer the music recognition facility.

Read More  Hulu Plus Login - How To Login & Use Hulu Plus

If you do not want to use either the dedicated apps, or the virtual personal assistants for recognizing the music, you can check out some online services that can be used for the purpose. A couple of them include

This is an online community of music lovers that can help you identify newer songs. It works on the basis of crowd-sourcing.
WatZat sources its information from the huge list of members it has on its portal. You just need to upload a sample of the track you want to identify. However, you have to include as many details about the song as you know. The online members will help you out in identifying the song.
Download WatZatSong For Android and IOS  Free

This is yet another music detection site that works effortlessly. You would need to have microphone enabled on your PC or laptop for it to work.
You can launch the website and sing the song into the microphone. The website will recognize the song and present it to you. The site also works effectively with the music playing around you. The detection is on the dot, but the site takes a little time to recognize the song &  find song by partial lyrics.

Well, those were a few ways you can use for recognizing the song you are trying to recollect. Most of the apps do support humming and whistling, and thus can be helpful in finding that song that has stuck in your mind. We have listed several ways including virtual assistant, apps and online options. You can use the one that suits you.
We would love to find your comments and opinions with respect to the apps we have listed here. Your feedback will help us disseminate more information on the best song recognition techniques you can employ.