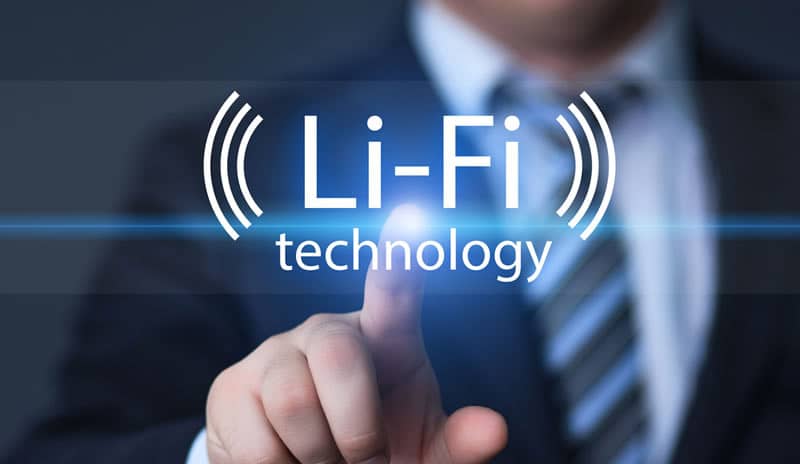 Li- FI stands for light fidelity; it is a Visible Light Communication (VLC). This is nothing but a system that runs wireless communication and it travels at a very high speed.

Li- fi contains a common LED which is used in a household. Led is nothing but light emitting diodes which are used to enable data transfer and this even enables to boost up the speed up till the speed of 224 gigabits in a second.

This term was first mentioned back in the year 2011 at the University of Edinburg by the professor Harald Haas; he mentioned this in a Ted Talk. Professor had envisioned this that the light bulbs can also act like Routers and work like a Wifi instead. And ever since then he started working on it and finally in the year 2012, professor Haas introduced Li-Fi to the world a first ever Visible Light Communication technology.

How the Li-Fi technology does actually works?

Not only they sound similar but the functions of Li –Fi and Wi-Fi are similar as well both transmit the data electromagnetically and build a network.

But the only difference is that Wi-Fi uses radio waves and Li- Fi waves are visible on light. The Li- fi as it is a Visible Light communication technology it uses a photo detector for one to receive light signals and also requires a signal processing data element to convert this data into a stream- able content.

Without even being visible to a human eye a LED bulb which is a semi conductor source for this can be easily dipped and dimmed and push up and down at once, with extremely high speeds, and the best part is that it happens in a flash and is not even visible to human eye.

Data is fed into LED light bulbs, and then sends a data which is basically embedded into its beams; this is done at a rapid speed to the photo detector.

The receiver is the tiny changes into the rapid dimming of LED are the electrical signals.

This signal is then converted into the binary data and this is streamed and will be recognized as web and audio applications which will easily run on internet handy device.

The future of Li-Fi in the near time

After the invention of the Li- Fi in the year 2012, the Li-Fi pioneers pure Lifi merged with the forces of French lighting company named as Lucibel and this was just to bring the best products of this technology within a year in 2015.

PureLifi already has launched two products in the market ever since then, a) Li-flame ceiling unit b) Li- flame desktop unit

The speed of this is high and with this integration of product and connectivity the demand for this kind of business in the near future will be high. This is one of the biggest hidden opportunities to the retailers who deal in these products to now even sell connectivity products; the scope for this is vast if one taps on to the right target market. These retailers can even easily transmit the data to all their customers without any problem and with complete security as well.

Du and Zero 2 the two companies primarily from Dubai and UAE are now testing this technology, and they claim this to be a successful product as they have provided many with the internet, audio as well as video streaming technology that is Li-Fi connections.

The bigger news is that Apple is also planning to come up with Li- fi technology in their products and according to the sources in IOS 9.1 there were few references mentioned as Lifi capability, clearly stating that there are chances the new iOs products might add this feature to their new launched products.

Though the speed of Li-Fi in every sense is beating Wi-Fi as it has 224 gigabets in a second, but the technology only works up till the place where the light falls and will not be able to use across the hall , as the light cannot pass the wall the connectivity will also not reach the other room, so here the Li-Fi lacks.

The places where there are no light bulbs, there cannot be a Li-Fi connectivity technology just like public areas, so unlike Wi-Fi, Li-Fi cannot be used everywhere and anywhere.

Though Wi-Fi is soon coming up with battery saving technology and a higher speed it still cannot match the speed of Li-Fi, when it comes to speed Li-Fi is just exceeding every time.

The security level of Li-Fi will be higher than Wi-Fi as the range is limited, so not all the drawbacks are against Li-Fi they even favor the product.

Wi-Fi cannot even reach 70 megabits per second, so in comparison to this Li-Fi has a lightning speed. Li-Fi is a growing technology and there are chances that innovations might help the technology to overcome all the flaws in it.

Li-Fi is one of the most outrageous inventions, the speed and the level of connectivity it has to offer is tremendous, sooner or later with maybe Apple products or other products we will get introduced thoroughly with the same technology and might experience this in the best of the ways, and if solar energy is added to this there are chances that this becomes the cheapest connectivity mode.

How to set up RoadRunner Email on Android?

What is File Extension AAE and How Do You Open It ?